The Circle #7:
The Deceptive Cadence

This deceptive cadence happens all the time in the 12 Bar Blues, a song form that is used in thousands of the early rock and roll songs. Get your ears tuned in to the sound of the V or V7 moving to the 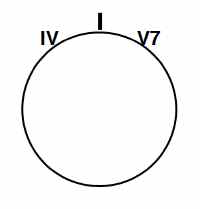 (G/G7 to F in the key of C) and before you know it, you’ll be hearing it everywhere!  Below are just three examples.

In Buddy Holly’s Oh, Boy you’ll hear the deceptive cadence at “that you, were meant..” (Key A)

In Dion’s The Wanderer you’ll hear the deceptive cadence in the chorus at “they call me the wanderer, yeah, the wanderer..” (Key Eb)