The Circle #1:
The Perfect 5th

Welcome to  The Circle where you’ll discover the numerous ways the Circle of 5ths can be used to build your understanding of the structure of music .

The Circle of 5ths is exactly that; a circle with the twelve tones of the Chromatic Scale spaced evenly around the perimeter one fifth interval apart. You can think of it the same way the twelve hours are spaced around a clock-face five minutes apart.  What’s the reason for The Circle? You can use it as a tool to understand the organic nature of how chords and chord progressions are organized in western music.

Pick any note on the circle to start on. This will be the key you will be playing in. Let’s choose C at the 12 noon position on the circle. The fifth of C is G, the note immediately to the right of C in the 1 o’clock position. Count it 1-C 2-D 3-E 4-F 5-G. G is the fifth note of the C Major Scale. 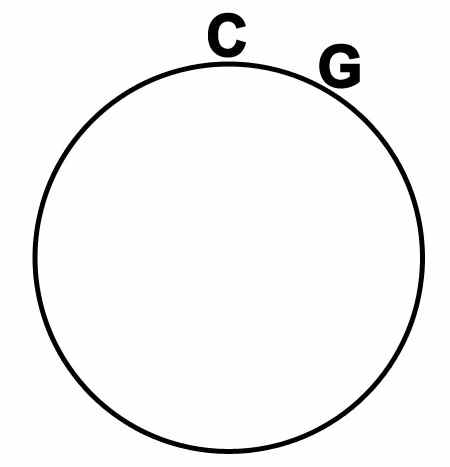 Observation: The fifth of any key is found immediately to the right of the root on the circle.

If we make the fifth, in this case G, a 7th chord it will introduce a tension in the G Major chord that will make the G7 want to resolve back to the root C. We can substitute Roman numerals for the root (I) and the fifth (V) or the dominant 7th chord (V7). Use this method to transpose to any key on the circle and play two-chord songs in any key.

Observation:  Changing a Major Chord to a 7th chord introduces a tension which makes the 7th chord want to resolve a fifth interval counter-clockwise on the circle. 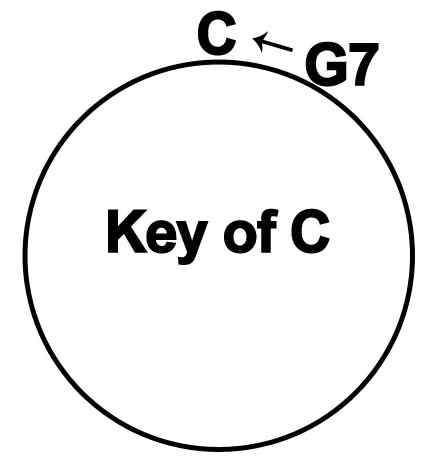 What made Sherlock Holmes such a great detective? His power of observation.  Make note of your observations as you make our way around the circle and soon you’ll be solving its mysteries.