Welcome to The Circle, our voyage into the mysteries of The Circle of 5ths. Today we explore one of the most handy aspects of the Circle of 5ths, The Instant Folk Song Chord Finder! As you may be aware, many folk songs only have three chords and those chords are usually the I, the IV and the V or V7 chord (in the key of C that’s C-F-G/G7). In fact, there are millions of other songs in the old time, rock, pop and blues genres that also utilize the I-IV-V chords.

Why the I-IV-V you ask? They are the Major Chords that naturally occur if we build a chord off each individual note in the Major Scale. In the key of C, for example, the chords would be C Major, D minor, E minor, F Major, G Major, A minor and B diminished. Notice that the I-IV & V chords are the only major chords in the bunch, so naturally they work well together. Now let’s see where those chords fall on the circle. 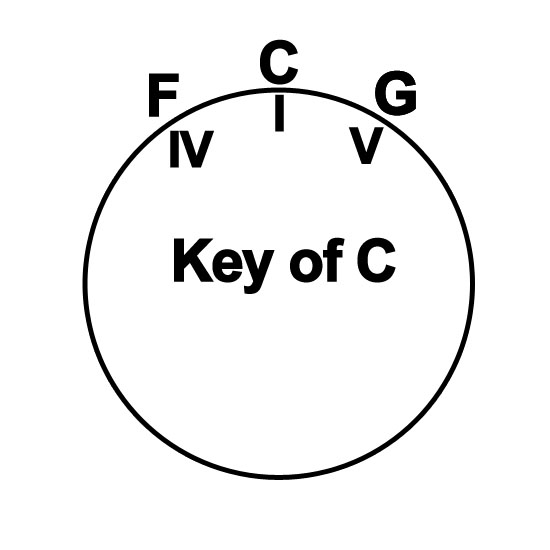 In the key of C, the IV chord F will be immediately to the left of the root note C and the V chord G will be immediately to the right. A simple observation, yes, but here’s the beauty of it. Let’s say you’re in a jam and someone blurts out they want to play a blues in Eb. Well, with your knowledge of the circle indelibly stamped into your consciousness, you’ll instantly ascertain that the IV of Eb is Ab and the V is Bb. And this method works for all twelve keys! 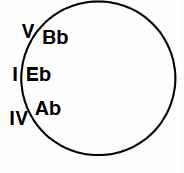