Welcome to The Circle, our  voyage into the mysteries of The Circle of 5ths. In previous posts we have been exploring Dominant 7th chord progressions culminating with the popular I-III7-VI7-II7-V7-I (C-E7-A7-D7-G7-C) sequence which is found in any other number of songs written in the first half of the 20th century including Five-Foot Two.

Using the same concept of the resolving 5th chord progression, we can substitute Diatonic (C-Dm-Em-F-G7-Am-Bdim) chords for some of those dominant 7ths. Here’s the result when we apply it to the 1-3-6-2-5-1 progression above. I-iii-vi-ii-V7-I (C-Em-Am-Dm-G7-C). Play this progression on your uke and listen to the difference using the minor chords. 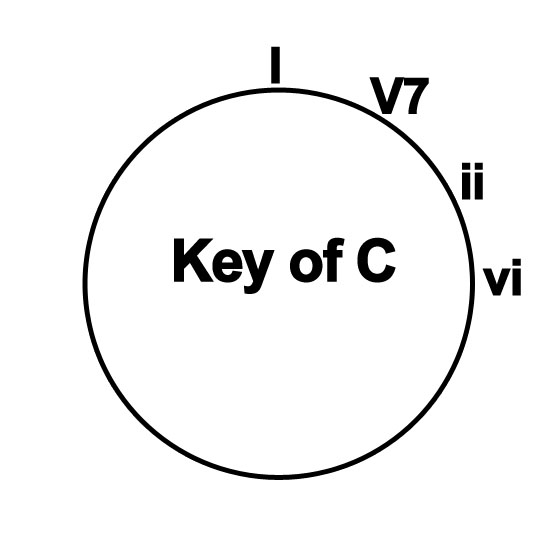 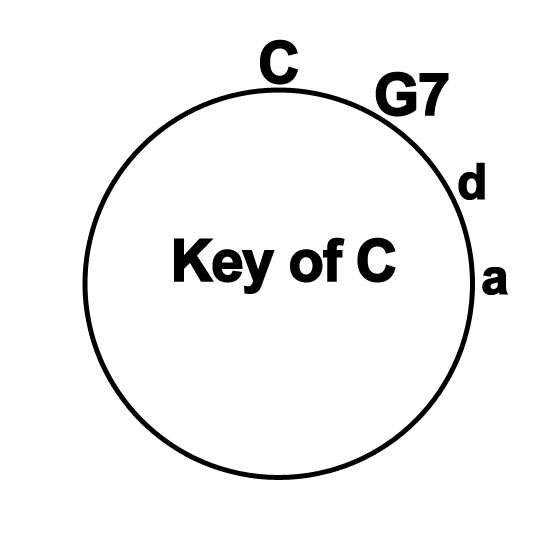 Next, drop the iii chord and you’ve got one of the most over-used chord progressions of all time the I-vi-ii-V7-I (C-Am-Dm-G7-C).

Now called the Rhythm Changes, after the Gershwin song I Got Rhythm, you’ll find this progression used in thousands of songs written in the 1950’s and early 60’s. Play it on your uke and no doubt the songs will start popping into your head like…Blue Moon, 26 Miles, Lollipop, Sherry, You’re Gonna Lose That Girl, Mister Sandman, Return To Sender, Teenager In Love, Sh-Boom, Devil or Angel, Earth Angel, Take Good Care of My Baby, Heart & Soul, Come Go With Me, Be True To Your School and many more. In fact, if you find other songs with this progression while you are practicing please list them in the comments section.

Observation: Substitute diatonic minor chords in place of dominant 7th chords and unlock the door to thousands of songs!