Posted on: November 29th, 2011 by dville
There is one song that I’ve never heard a ukulele group or jam make it through the bridge together without the wheels coming off;  Blue Moon.  Why, because it breaks the logical pattern of resolving around The Circle.  We’ll learn theDean Martin version of the song in theKey of C.  The I-vi-ii-V7-I pattern of the verses is one of the most popular in western music, is also known as the Rhythm Changes.  Look how the pattern lays out on The Circle. 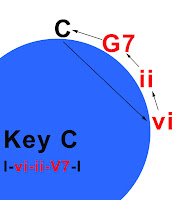 I-C ii-dm iii-em IV-F V-G vi-am vii*-bdim
Blue Moon
Richard Rodgers and Lorenz Hart 1934
Intro: I-vi-ii-V7 (C am dm G7) 2x
Verses: I-vi-ii-V7-I (C am dm G7)
Blue moon, you left me standing here alone,
Without a song in my heart,
Without a love of my own.
Blue moon, you knew what I was there for,
You heard me saying a prayer for,
Someone I really care for.
Transition to Bridge: I-IV-I-I7 (C F C C7)
Bridge (Normal Part): ii-V-I 2x  (dm G C)
And then there suddenly appeared before me
The only one my arms would ever hold I heard

somebody whisper please a-dore me
And when I looked the moon had turned to gold.
Last Verse: I-vi-ii-V7-I  (C am dm G7)
Blue moon, now I’m no longer a-lone
Without a song in my heart,
Without a love of my own.Once you get the rhythm changes under your fingers (and in your ears) all you have to do is memorize that tricky bridge.  The first part is an easy ii-V-I  (dm G C) which is a standard jazz chord progression, again falling naturally on the Circle of 5ths.  Then the strange part, which isn’t really that strange.  Songs bridges like to go to the IV chord.  In this case, it’s the iv minor.  The two oddball chords the bVII and bIII (Bb Eb) then make a cameo, which in turn sets the song up to resolve back to the verse V-II-V-V7 (fm Bb Eb G D G G7).
Taken from Richard G’s Ukulele Songbook
This song is used for educational purposes only.