The Circle #22:
Beyond The Sea 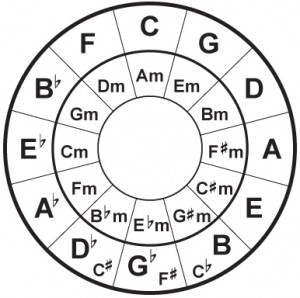 What makes Beyond The Sea such a interesting tune is the way it modulates through three, count them three different keys! If you look at the chart for the song at Richard G’s wonderful site, you’ll see the song has a whopping 15 chords! Don’t let that scare you off. With a little investigation we’ll see the song basically uses only 4 chords, the I-vi-IV-V7-I pattern, to establish the fundamental format of the song.

We’ll learn Beyond the Sea in the key of F. The first thing to do is to convert the notes of the F Major Scale into the number system and use the numbers to name the chords in the progression.

Now we can apply the numbers to the chords in the song to reveal the chord progression. Beyond The Sea starts out with a I-vi-IV-V7-I pattern (F-Dm-Bb-C7). Play this pattern with two beats on each chord over and over until you have the sound of the pattern firmly planted in your ears and muscle memory of your hands. Do not move deeper into the song until you have accomplished this all important first step. You don’t want to think of the chords as letter names or chord shapes on a piece of paper to be committed to memory. You want to commit the sound of the chord progressionand the order of the numbers to memory.At the end of the second line you’ll see a III7-vi-V7 turn-around and then the first pattern begins again I-vi-IV leading not to the V7 again but to VI7-ii-V7-vi-IV-ii7 then ending on the V7.

For the second half of the song simply repeat the above progression but this time end the last line on the I:
V7-vi-IV-ii7–V7-I (C7-Dm-Bb-Gm7-C7-F)

Here’s where the fun begins, the modulations! The song now moves to the key of A. The smoothest way to get to A from F is to play the V7 chord of the key you want to go to. In this case E7 is the 5th of A.

Once this is accomplished, the song has the exact same chord progression we started with, only now in the key of A. This is why it’s better to memorize the numbers than the letters, it makes transposing to another key very simple.

Then we quickly modulate to the key of C by playing the 5th of C, G7 and again repeat the same chord progression we started with.

Did you notice the three keys we used to play Beyond The Sea are also the notes of the F Major chord (F-A-C)?

The number system may seem a little intimidating at first, but after learning a few tunes this way you’ll notice there aren’t that many patterns and there is a lot of repetition. Remember first and foremost, you are learning how these different sounds (chords) fit together. Have fun with it. Notice how much fun Bobby Darin has when the band kicks the tune up to the next key (:44 & :54)!