Welcome to another edition of Connect The Chords! In this episode we’ll break down Elvis’ 1961 classic Can’t Help Falling In Love from the soundtrack of the film Blue Hawaii.  Your job is to listen to the song a time or two making note of where in the lyrics the chord changes.

Can’t Help Falling In Love
Hugo Peretti, Luigi Creatore & David Weiss
When trying to figure out the chords in a song, first determine the key, in this case D, and write out the chords associated with that key.
Key of D:
I-D Major  ii-E minor  iii-F# minor  IV-G Major V-A Major (A7)  vi-B minor  vii-C# dim
Most pop songs will start on the I which is where the intro to the song starts.  You’ll notice I’m also using the numbers of each chord of the scale instead of the letter names which makes it easy to later transpose the song into a different key if you want.  I’ll list the chord progression to each part of the song below.  You simply put the chords in the right spot. 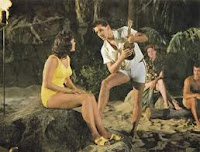 Intro:
I-V-I (Instrumental)
Verse 1 & 2:
It would be quite a task to simply remember the sequence of chords in the verse unless we break it down into sections that coincide with the phrasing of the lyrics.  Almost every word gets its own chord.
I-iii-vi-IV-I-V-V7-IV-V-vi-ii-I-V-I

Take my hand, take my whole life too,
For I can’t help, falling in love, with you.
Repeat Bridge & Verse 3

This is the way I memorize songs, by numbering the chord sequence, then putting the sequence in my head musically.  In this song I especially love the beautiful IV-V-vi ascending passage.  Enjoy learning it, by ear!
The lyrics to this song are posted for educational purposes only.