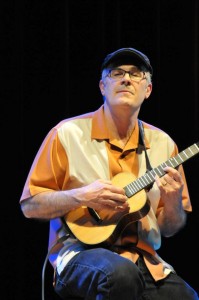 This week 3 Questions interviews the ukulele tab master, Dominator!
1. What is your approach for tabbing out a song?

The first thing I do when deciding to transcribe/tab a song is to actually learn how to play the song or more specifically, figure out “what should be played”. Just because I have the ability to get a song onto paper and into tablature format doesn’t necessarily mean I can play the song at performance level. Take Jake’s 3rd Stream for example; I can play all the parts slowly but I can’t play it at performance tempo.

So, to learn the song I will load the audio file into a software program called Transcribe. Transcribe allows me to slow down sections that are too fast without changing the pitch. There are a number of programs available to do this however one feature that sets it apart from the others is the spectrum analyzer. It allows me to highlight a certain range of music, say a chord that is being strummed for example, and the spectrum displays the notes within the chord. This is especially helpful for identifying those nice jazzy sounding chords that are sometime troublesome to hone in on.

Once I have a grasp on the song I then sit with my ukulele at the computer and manually enter each note one at a time into the Powertab editor. I use Powertab, a free tablature program, for the tabs on my website. It does have some limitations but it has served me well over the years. Learning a song usually goes much quicker than actually plugging it into Powertab. Depending on the complexity of the song it can take several days of input to complete just one song. The most difficult part of the process is choosing the correct note values so the midi output sounds at least somewhat like that of the original audio file. The more you input to Powertab the easier it gets but if you take a break for any reasonable period of time then it sometimes takes a while to get back in the swing of things once you start tabbing again.

2. After learning a song from tab, how do you then distance yourself from the paper?

It’s pretty easy to separate from the tab once I have committed the song to memory. When learning a song from tab (assuming it is a tab such as Powertab or a tab like those in the Masters series books from Flea Market Music – as opposed to ASCII tabs created in a text editor) the first thing I do is figure out how to navigate the tab. This is very important. Just the same way driving from point A to B is much easier when you have your mapquest available it makes it much easier to work with tablature when you know where it goes in relationship to the audio recording. So I will listen to the audio while following the tabs musical directions (ie. Dal Segno Al Coda, To Coda etc.) until I know exactly how to navigate the tab from start to finish. It is very tempting to just grab the uke and start playing with the tab right away but some time spent up front getting familiar with the tab and how it relates to the audio pay great dividends in the end.

Once I am ready to work with the tablature I just take it a few measures at a time. If there is an intro, maybe that is all I concentrate on until I have it under control then take on the next few measures. I continue this process, while going back and playing from the beginning to as far as what I’ve learned until I’ve learned all the sections. Once I’ve learned all the parts, I put the tab aside and, it is a matter of just repeating and practicing it over and over until it is committed to memory. The nice thing about having the tabs is that if I have not played a song for a period of time, and have forgotten a section or certain chords or whatever the case may be, I can quickly go back and review the tab and be back up to speed much quicker than digging out the recording and working it out again.

3. Do you think an understanding of basic music theory is important in learning to play the ukulele?

I think it is definitely helpful. Obviously, it certainly can’t hurt. But is it absolutely necessary? I don’t think so. I do think it really helps in the area of improvising on the fly when jamming with others. Knowing at least where to be playing on the neck when you are called to solo is half the battle regardless of your current playing ability. I do sometimes find myself in situations where I need to improvise but I actually prefer to work things out in advance.