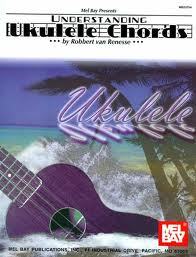 Robert Van Renesse is the author of the Mel Bay publication, Understanding Ukulele Chords. The book is a must for the ukulele player that craves universal chord knowledge and insights for taking their playing to the next level.

1. What prompted you to write Understanding Ukulele Chords?

Understanding Ukulele Chords is based on a collection of notes that I took while figuring out uke chords. Having played Freddie Green style jazz guitar in an Ithaca-based big band for many years, I was already familiar with the function of major, minor, seventh, and diminished chords and many variations on these chords. Being a methodical type of person, I took the same approach to learning uke chords as I did to guitar chords: I never just learn a shape; at the same time I also learn the scale degrees of the notes in the shape by rote.

This works best for closed chords (no open strings). For example, when I learn a particular C7 shape, I also will learn where the first, third, fifth, and seventh degrees are. Knowing that, I can immediately figure out how to play a Cmin7 (by lowering the third), a Cmaj7(by raising the seventh), a C9 (by raising the first degree by two half-steps), and so on. Each of the four notes can be raised or lowered by one or two half-steps (that is, frets). Thus having learned just one shape this way, I also learned a large collection of new C chords with little additional effort. And by moving entire shapes up and down the neck, I can change the pitch of any one of those.

At some point it occurred to me that perhaps others would be interested in learning chords using such a systematic way, and so I copied my notes into the computer and sent a draft to William Bay at Mel Bay Publications, Inc. He invited me to extend my notes into a book.

2. How should a beginning ukulele player approach building a mental road map of the ukulele fingerboard?

This may sound unintuitive, but I think it is best for a beginning ukulele player to start with closed chords; that is, chords with no open strings. For the fingerboard to make any sense at all, the player should be or get familiar with some basic music theory, starting with the diatonic scale, so that once a player has figured out how to play a (closed) C chord, the player can also figure out how to play a D chord (by shifting the shape by two frets). The player should learn that a minor chord is formed from a major chord by lowering the third, The player should also get familiar with seventh chords, and learn that if you raise the 7th degree by two half steps you get a major chord.

Next, the player should get familiar with some common chord progressions, such as I-IV-V7-I, and the sound of those, first played in one position on the fingerboard, and then practiced in other positions. In my experience, it’s best to try and avoid looking at your fingers as much as possible. It’s your fingers that have to get familiar with the shapes, not your eyes.

Once handy with the closed chord shapes and chord progressions, it is easy to turn them into open chord shapes by moving them all the way to the top of the fingerboard.

3. How would you turn a simple I-IV-V7-I arrangement into a more interesting sounding chord progression?

It depends on the style of music. Sometimes it doesn’t sound so good to make it very fancy, but in jazz and swing, you can go all out. Ignoring rhythmic strumming techniques, you make a chord progression more interesting by using chord substitutions. There are many ways to approach this, and it’s good to mix them all up. A particularly useful form of chord substitution is to take the simple chords and give them more flavor. For example, I will almost always play a sixth chord instead of a I or IV chord, and I often will play a 9th or 13th chord instead of a V7 chord. Another idea is to use different substitutions at different times. For example, I may go back and forth between a major 6th and a major 7th chord. One can also play the same chord in various positions, switching every strum or every couple strums, for good effect.

Then there are chord runs. On the guitar, these usually follow a simple ascending or descending bass run. For example, instead of four strums on a C7 followed by an F, I might play C7 — Gmin7 / D — D#dim — C7 / E — F6 (the notation C7 / E means to play a C7 chord with an E in the bass). So I end up with playing C — D — D# — E — F in the bass, a simple ascending line that sounds good. However, on the uke, which doesn’t have a good bass response, a bass run is not terribly effective. Instead I put the run on the first string (or the octave fourth string) instead, creating what you might call a soprano or treble run. I have a bunch of these runs, ascending and descending, major, minor, dominant, and diminished, programmed into my fingertips.

Finally, a really easy and effective technique is to approach a chord from half a step below. So just before playing a C chord, say, on the last and of the measure before, you play a B chord and shift it into the C chord.

Keep in mind that with all these techniques it is much more important to keep the time going than it is to get the right notes. Even if your left hand is fumbling, as long as your right hand keeps going you can get away with a lot!