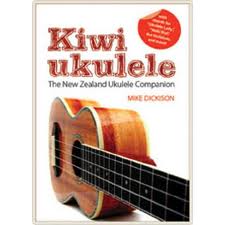 New Zealander Mike Dickison is the author of Kiwi Ukulele. Al Wood of Ukulele Hunt calls it “by far the best introduction to the ukulele I’ve ever read.” Mike received his PhD from Duke University. His thesis: Allometry of Giant Flightless Birds.
1. What inspired you to write your book Kiwi Ukulele?

I had learned to play in North Carolina, when I was looking for a distraction from having to finish writing my PhD thesis. I was studying the evolution of flightlessness in birds, which involved measuring bones and constructing statistical models of shape and size change, so as you can imagine distractions were welcomed. When I got back home to New Zealand, the ukulele craze was just getting going, largely thanks to The Wellington International Ukulele Orchestra. But the only tutorial books in the music shops were cheap reprints of 1920’s songbooks, still tuned ADF#B, or, worse, they were Australian. There’s a certain trans-oceanic rivalry here that fans of Flight of the Conchords may have noticed. Anyway, I complained about this state of affairs to an editor friend of mine, who pushed me to write something myself. Then eight months later there was a book, though it wasn’t without pain. I ended up doing most of the illustrations myself, as well as about 150 hand-assembled chord diagrams.

Curiously, there’s a connection between flightless birds and ukuleles. The ukulele islands are Madeira (from whence the proto-ukulele came) and Hawaii, where it was named. Both of these are also hotbeds of extinct flightless birds; I spent some time at the Smithsonian working with the mavens of Hawaiian bird extinction, but it never occurred to me to ask them about the uke.

2. Do you have any specific practice tips for beginning players?

Transposition is an incredibly powerful tool for beginners, yet I don’t see it covered much. Using a capo to shift a song into a more friendly key is a good exercise, because it teaches the player the chromatic scale. From there, I work with them on barring chords, and encourage them to try the barred fingerings of Em and B, to show them how useful it is for fast chord changes. When I feel they’ve gotten enough hand strength to bar chords reliably, we shift chords up and down the neck; there’s often an “aha!” moment, when they realize that open chords are just a barre chord, barred at the “0th” fret. Beginners start to see that chord fingerings are not these mysterious magical objects to be memorized, but actually have an underlying shape and logic. Then they can start figuring out higher-position chords for themselves, which opens up all sorts of possibilities, including songs they might have abandoned because the chords were too difficult.

3. Did you have any revelations on ukulele technique while writing your book?

Lots. I didn’t know much music theory when I started. When I first learned an instrument, as a kid, I hated practicing scales, but I was converted while writing—so much so that one section of the book is titled “Scales do not suck”. Also after finding numerous contradictory arrangements of songs on the Net, I came to agree that there’s no substitute for figuring out a song’s chords for yourself; and in doing that, the rote learning of scales, keys, and chord progressions all came together for the first time. Another revelation I had was that the ukulele is as much a percussion instrument as it is a chorded one, by which I mean that getting beginners to break out of the standard chunka-chunka-chunka strum into something more syncopated is a really important milestone. I think strum techniques get short shrift compared to finger-picking and fancy chord voicings, yet that’s an area where beginners can quickly hear real improvement.