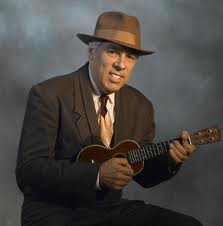 Fred Sokolow is a Los Angeles based multi-instrumentalist and prolific author of music instruction materials. From Blues to Bluegrass, Fred can not only play all styles of music, his instructional materials clearly explain how to learn the essential elements of those styles. Fred’s Blues Ukulele book is a fine example of such a work.

1. Do you primarily use the blues scale when you are soloing over a blues chord progression?
No. It’s good to know the blues scale and it can help get you started playing single-note licks and blues phrases. But a more authentic and colorful blues vocabulary comes from chord-based licks. The best chord shape to start with (for single-note soloing over a blues progression) is the Bb chord shape (it’s the F chord shape on guitar), because so many blues phrases can be played easily from that position. It’s the position used by electric blues soloists like T-Bone Walker, BB King, Buddy Guy, etc. You play the notes of that chord shape, plus nearby notes which are part of that chord’s major scale…and other adjacent notes which are blue notes (the flatted 3rd, 5th and 7th). It’s a moveable shape (no open strings), so you can use it to play in any key. There’s a section about it (and about some other blues positions useful to single-note soloists) in my Ukulele Fretboard Roadmaps book/CD.
If you have a more acoustic, finger-picking approach to the blues, rather than the single-note, electric style, chords are even more important. In the single-note style described above, you often stay on that F chord position throughout a tune, while some other chording instrument plays the progression…because the licks derived from that position work over all the changes. But in the acoustic, finger-picking style blues, you play the chord changes of the song and improvise by altering each chord with hammer-ons, pull-offs, slides and added-on notes, to create blues phrases. You need to develop a vocabulary of licks, cliches and ideas that go with each chord shape you play. How? This gets into question #2.
2. What is a good approach to building a personal arsenal of blues licks?
Listen, and play along with, the great blues players. Try to imitate the blues phrases and licks you hear repeated by your favorite players. If it’s an electric blues guitar, study the blues boxes mentioned above and try to find the licks Eric Clapton or Albert King (or whoever) played. You know those videos where Clapton is on stage with BB King, and BB plays a phrase and Eric plays it back to him, slightly altered? He can do that because he’s using the same positions and phrases BB uses.
If it’s acoustic-style blues, where you’re playing chords and licks both at once, find out how to alter the basic chords to reach and add on blue notes. Imitate the licks and phrases you hear. You can do the same listening to a blues keyboard player or horn player. I once heard a recording of Sidney Bechet playing a soprano sax solo in the early 1930s that sounded so much like a BB King guitar solo, I’m convinced BB was influenced by Bechet’s playing (Bechet also played clarinet). Some of Earl Scruggs’ bluesy banjo licks sound like honky tonk piano!
It’s great to play along with recordings and try to imitate the licks and phrases you hear, but also just “play along” and make up your own stuff and get in the groove. This is how you learned to speak your native language…by jumping in and trying to imitate those around you, with no lessons in grammar, no learning the alphabet (that comes after you’re already talking). At first you talk funny…gradually you get better just by doing it, constantly listening and imitating what you hear. And music is just like a language, especially improvisational music like the blues. Listen and play along, I learned most of what I know by playing along with records (those big black vinyl discs). You’ll find lots of chord-based licks and cliches in the arrangements in my Ukulele Blues book.

Incidentally, remember that when you learn a language (musical or verbal), you don’t just randomly string phrases and words together because they sound good…the phrases and words are tools to help you communicate. Same thing with music, you communicate feelings, non-verbal stuff, with those licks and phrases…at least that happens when you have a good command of the language, and you’re doing it right!

3. A lot of people just randomly memorize chords from a chord chart.Do you have a more systematic way to learning new chords?
In my Freboard Roadmaps for Ukulele book, there’s a chapter that describes a really good way to learn new chords. It shows you some basic, moveable chord shapes and tells you what intervals are in each shape. Then it shows how you can change each basic shape multiple ways, by adding a note here or there, lowering one string or raising it. That way, each new chord doesn’t just fall out of the sky, it’s a close relative of a chord you already know. And you even know why it is what it is (a 7th, or minor 6th, or whatever). Of course this involves understanding intervals and chord construction, which are also covered in other chapters of the book. But even if you don’t know all that technical stuff, it’s easy to see, by looking at the chord charts, how one unfamiliar chord grows out of another chord shape that is familiar to you.
So that’s how you understand a new chord. But you don’t really get familiar with a new chord shape, you don’t really own it, until you can use it in a song. It’s good to learn a song that has one or two new chord shapes in it, and practice it at an even tempo that’s slow enough for you to get to the unfamiliar chord in time (without slowing down!)…then gradually speed up the tempo. Once you can get to a new chord shape quickly, in the context of a tune, it’s yours for life.
Also be aware that chords occur in families, and there are certain chord sequences that are repeated over and over in countless tunes (like a blues turnaround, or 1-4-5 changes, or “the rhythm changes” (1-6m-2m-5). So it makes a lot of sense to learn these familiar chord progressions in several key…you’ll be needing them in lots of songs. Lots of this material is covered in the Roadmaps book.
Tags: 3 Questions Interview, Fred Sokolow