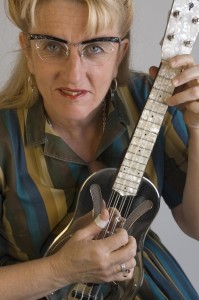 Seattle ukulelist and guitarist Del Rey is no stranger to the blues. She recently released Blue Uke, a fingerstyle instructional DVD on Homespun tapes and tours world-wide with Austin-based guitarist Steve James. She can often be found hanging out at the Uke Shack, which is where we caught up with her to ask her 3 Questions.

1. What is your approach to memorizing a finger-picking pattern?
If it’s just a right hand pattern, I hold up my hand like I’m taking an oath and play it in the air before I put my fingers on the strings. If it’s a pattern where I’m playing quarter notes with my thumb and a syncopated melody or pattern with my fingers, I play first the thumb part for a measure, then the finger part for a measure. After a couple times like that it’s easier to combine them.

2. How do you create an interesting blues solo?
Blues is a language; just like a spoken language, it has a vocabulary, syntax, accent-anything that characterizes language has it’s equivalent. There are different dialects-the dialect played in St. Louis in the 1920s is quite different from the dialect you hear in Los Angeles in 1950, but it’s still recognizable as a language called “blues”, just as Mexican Spanish today and Iberian Spanish of the 19Th century are recognizable as the same language.
Like language, the more you listen and submerse yourself, the more you become fluent. So how I create an interesting blues solo is by listening to specific pieces of blues music and knowing them well enough in my head that when I play, I reference them in a very unconscious way, and I have a particular accent. Same as when I speak Spanish-I have mostly learned from being in Mexico City, so that’s how my Spanish sounds. I have mostly listened to Black music from 1920-1950, so that’s how my time sense and musical vocabulary sound. Some people productively learn both languages and music in a more structured, academic way, but not me.

3. Do you have a favorite chord progression?
I’ve always been fond of progressions where one note stays constant while the chords change around it. Finding the notes that stay the same through progressions can be a cool way to bug around a tune. I’m also a sucker for a chromatic connection. You can see by this answer I am a primitive beast: I like the first because at least one note is right, and the second because I’m only one note away from being right. But I totally believe in the adage “better the wrong note in the right time, than the right note at the wrong time”.